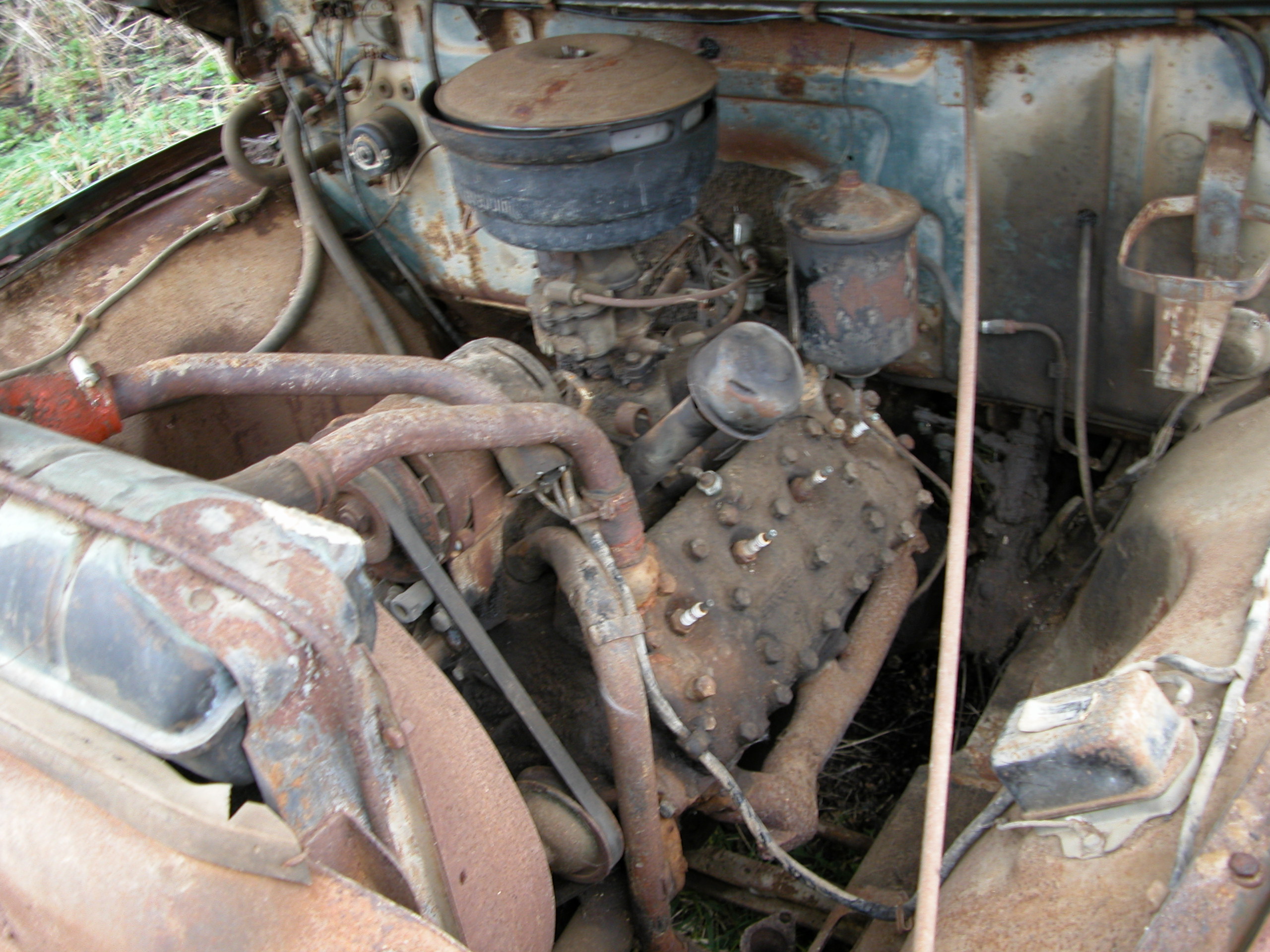 Mater’s Engine turned out to have some significant issues. We took him to a local race car engine machinist who seems to really know his stuff. However, it took him almost a year before he started working on it. Before we took it to him, I bought another Flathead engine off Ebay from a guy in AL. It turned out to be an “Ebay Surprise” in that he advertised it as being “in good shape, stored by a mechanic” but when I got it home and pulled the heads, there was water in all 8 cylinders. Long story short, I took both engines to the rebuilder and asked him which one he thought would be best to rebuild… He chose Mater’s original engine. 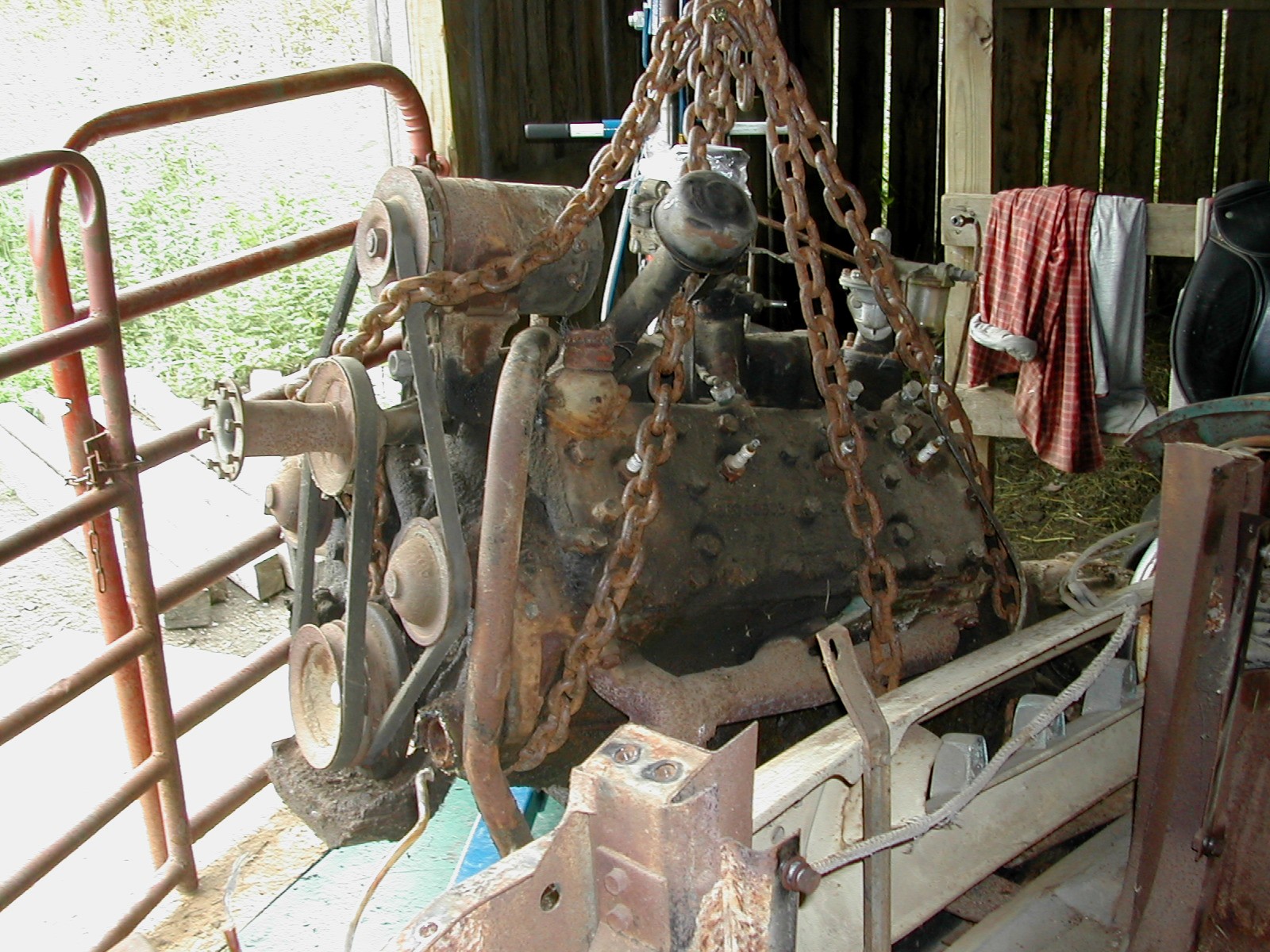 When Reed (the engine re-builder) finally got the engine torn down, he called and said the crankshaft had a “thunk” to it when you hit it, and it should have a “ring”…. He was afraid that it had a crack in it somewhere even though he couldn’t find it. I pulled the crank from the other engine I had and took it to him and we both agreed that it “SANG” when you hit it. GOOD NEWS.

A couple weeks later, he called me again to say he had set the crank up on the machine to turn it and he discovered that the new crank had a longer throw… it turns out that it is a MERC crank. SO we now have a longer stroke…. “STROKER”. The guys on FTE were all giving me a hard time cause we had lucked into a great upgrade for the Flattie. 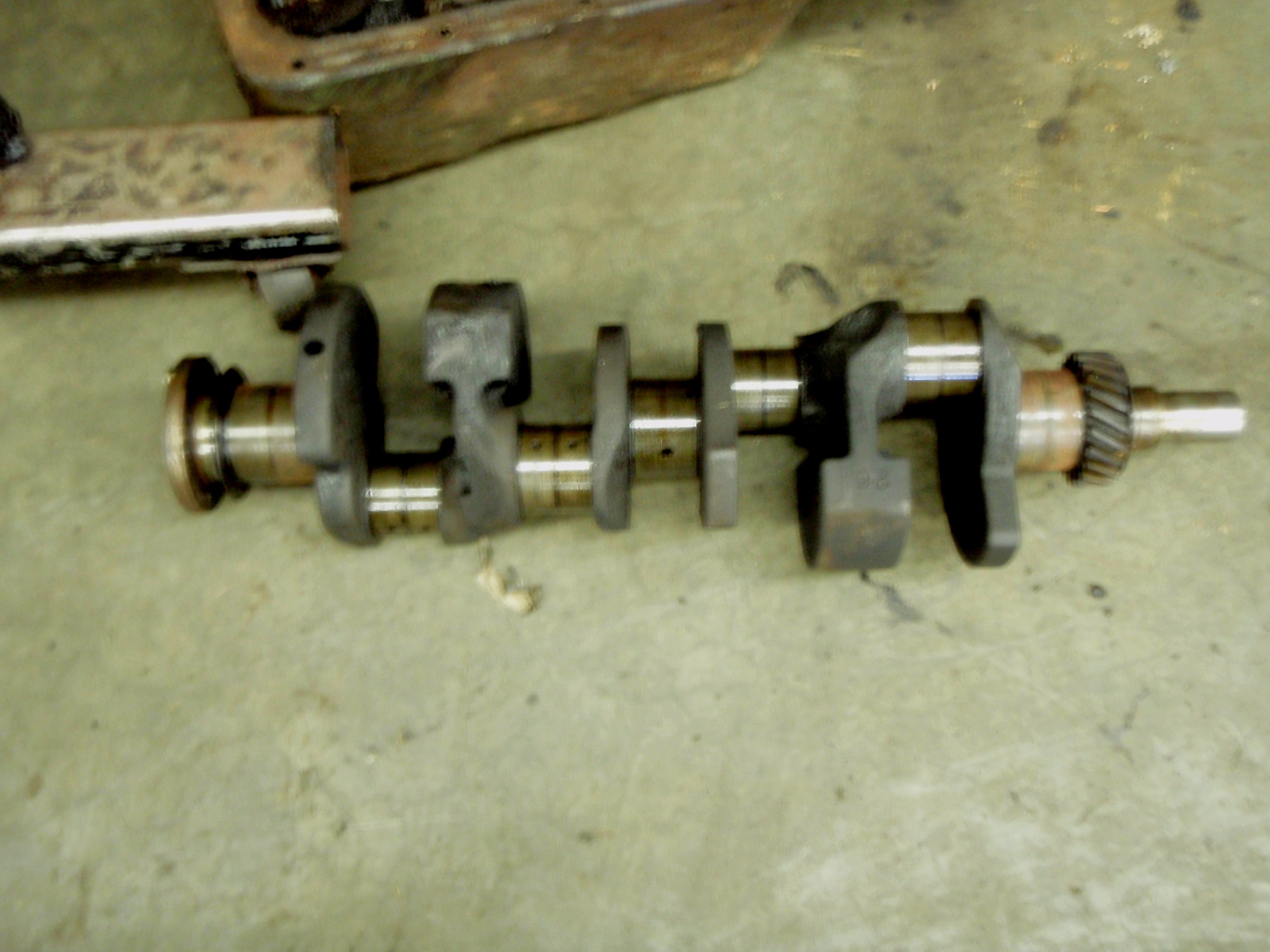 He bored the block to .040 over and when he went to balance the rods with the crank, we discovered that our rod bearings were oversize as well… AND one of the rods was worn such that we had to steal one from the Merc engine.

I bought headers from Red’s and a full flow oil kit as well. Seems that on these old Flatties, only 20% of the oil actually was piped through the oil filter. While we had the engine torn down we decided to go ahead and drill and tap the galleries to run all the oil through the filter. 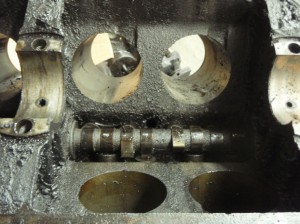 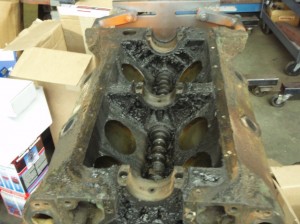 Put an Isky cam in it…

Coming soon to an engine near me…

Ok, so I’ve heard to siren call of the Darkside for some time now… I’ve resisted thus far.

The engine has turned the corner.  It has succumbed… 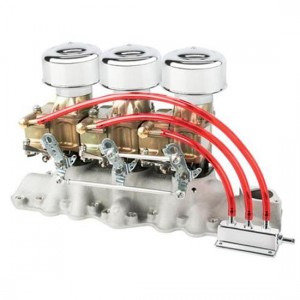 Ok, so after all this time, the engine is ready to go back together.

The crank is balanced, and the full flow oil filter modifications are done.  Reed said the reason Mater died was a clogged oil passage leading to the rear main.  It had to be drilled out to get the sludge out of it.

Carbs and manifold arrived today woo-hoo, and Reed is going to start putting the valves and cam back in this week.  New valve seats and guides.  I hope to get some pix tomorrow. 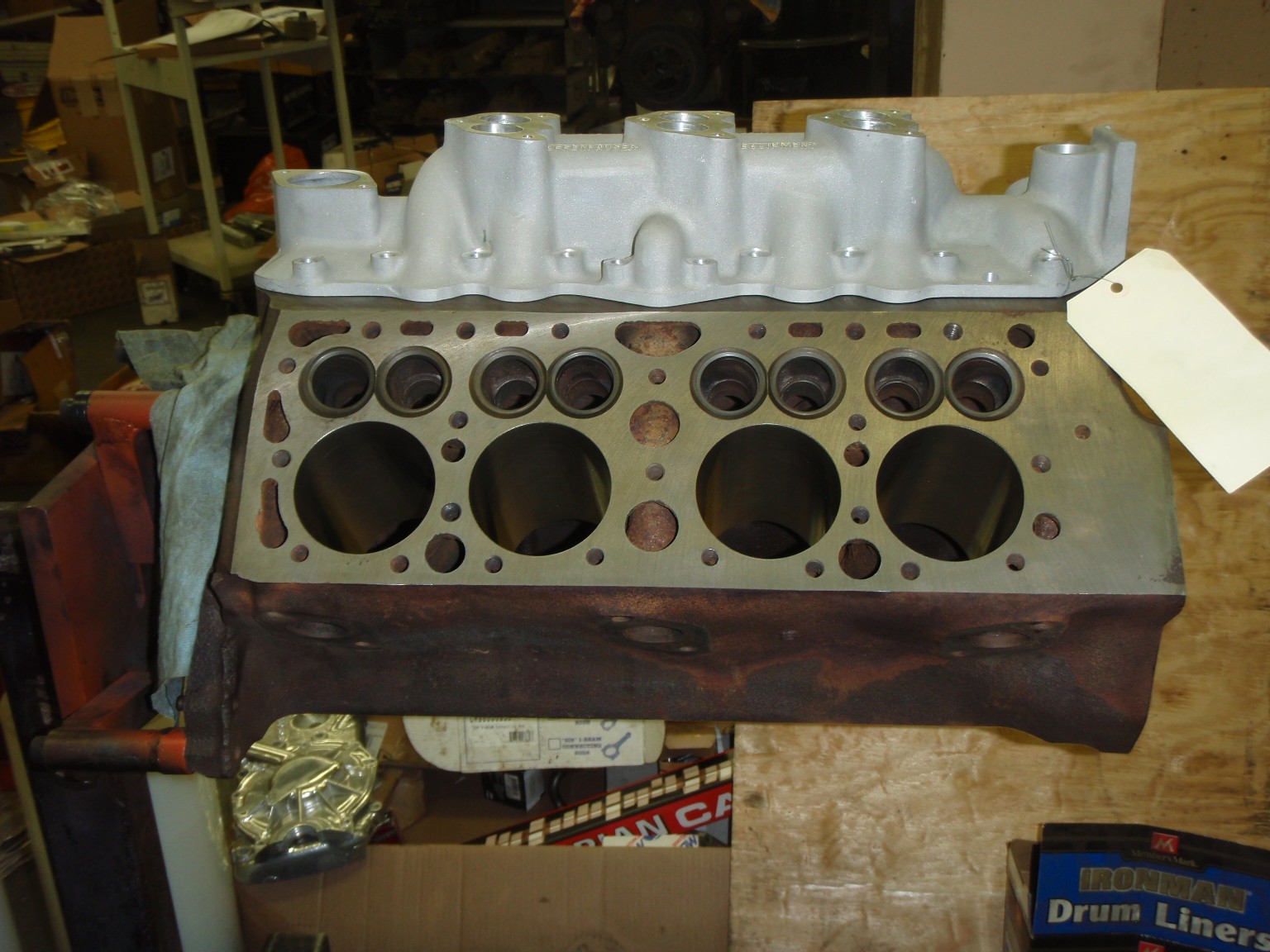 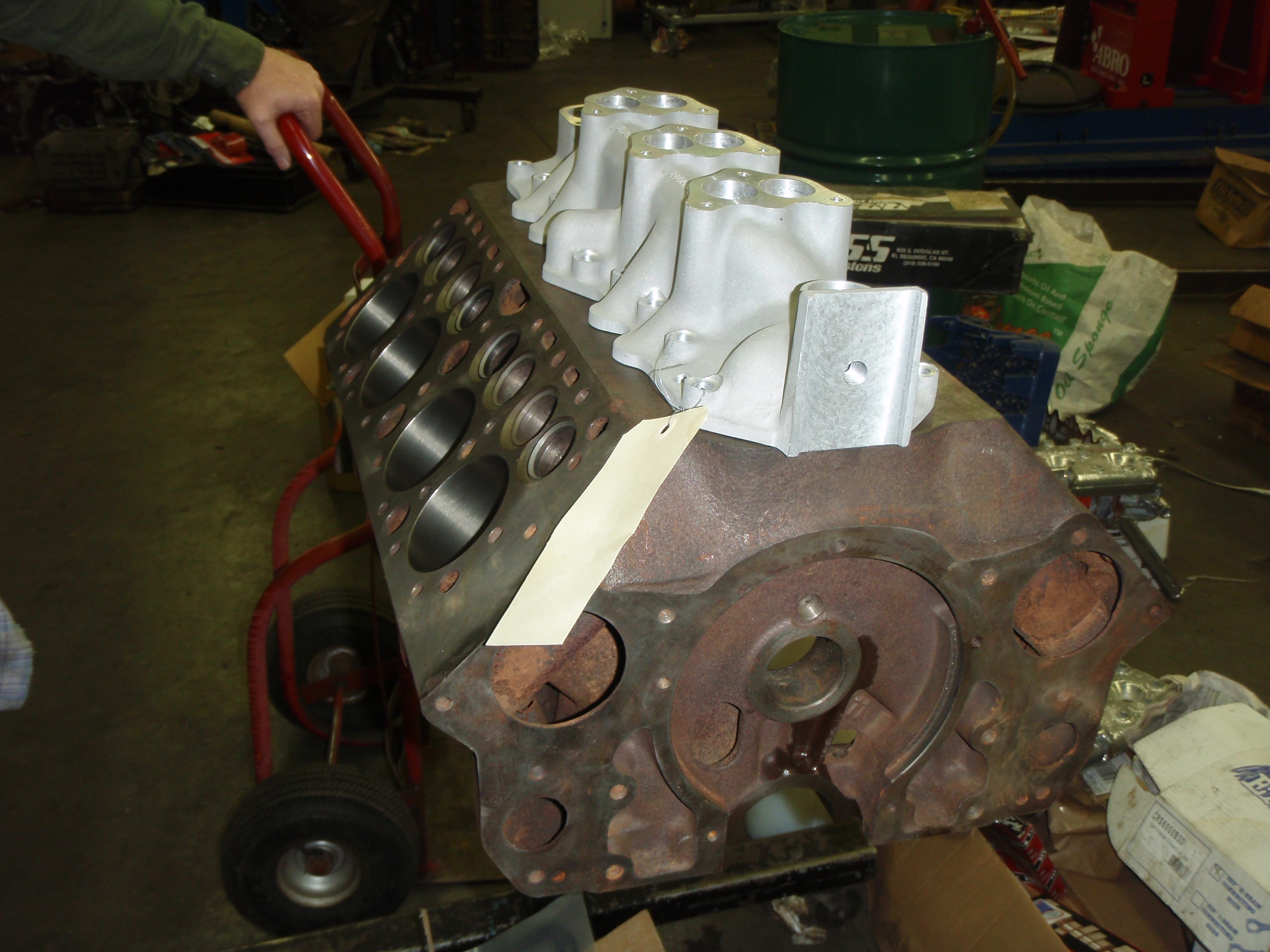 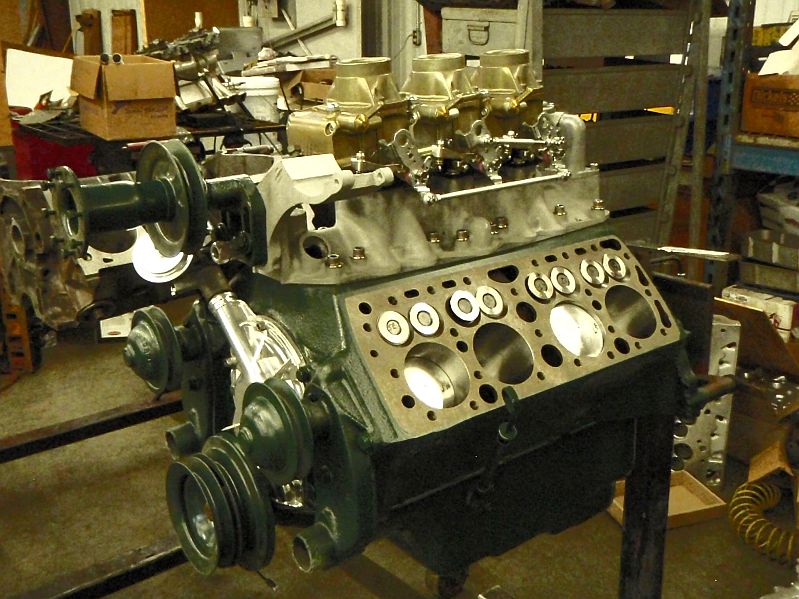 Finally some progress.  Valves in and adjusted, Carbs on, waiting on head bolts. 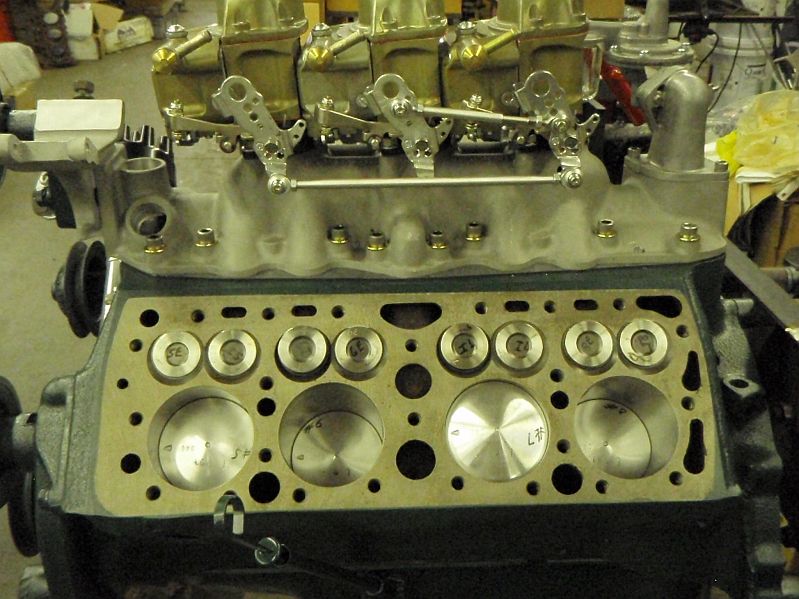 Finally got the heads on. 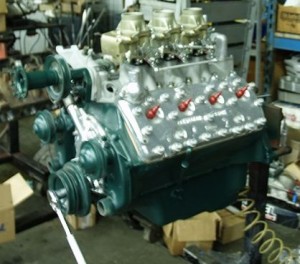 Well, it’s DONE…  stick a fork in it.  Brought the engine home today.  Now to find all the parts…  (Everyone told me when I tore it down 4 years ago to keep track of everything… HA jokes on me.) 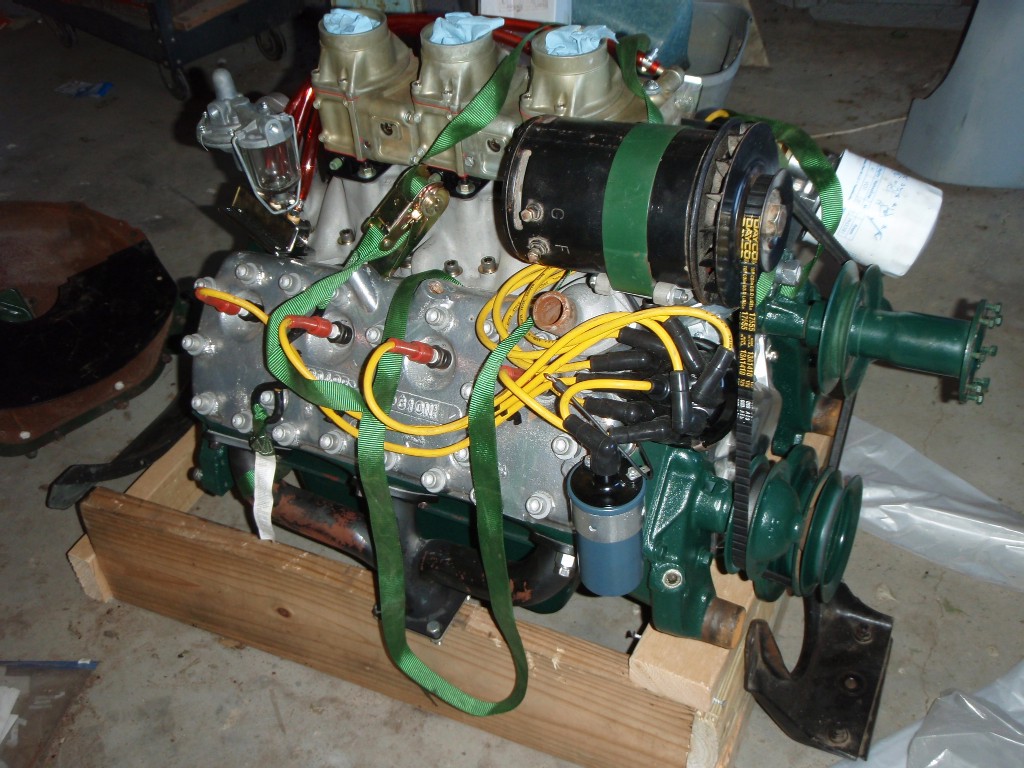 I had bought a new clutch and pressure plate for it some years ago, and now that I have to put it back together, realized the new throw-out bearing needs another piece to hold it on the fork.   WHERE IN THE WORLD DID I PUT THE OLD ONE?  It’s not with the old clutch and pressure plate, that would be too easy.   Well anyway, I did finally find it, but soon realized the new bushing for the flywheel was the wrong size….  Good ole NAPA auto parts didn’t mind that I didn’t have a receipt from 4 years ago…  and they found the right size.

Today I got the flywheel and clutch and bellhousing back on and the engine back on the frame.  Luckily I found a baggie tagged as “motor mounts ???” when I was looking for the throw-out bearing.  I had bought new mounts, but needed the square bolt piece for the front engine mount…  Even though I obviously wasn’t exactly sure what the pieces in the baggie were, it turned out they were the old motor mounts. 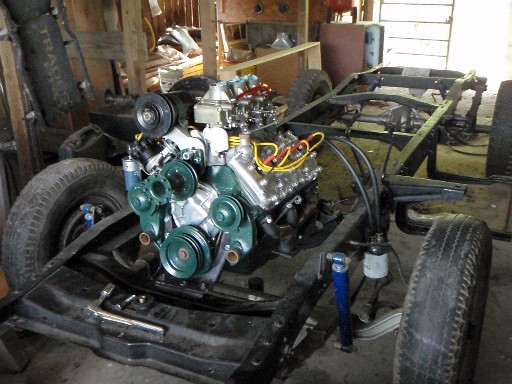 Finally re-built Flattie back on the frame. 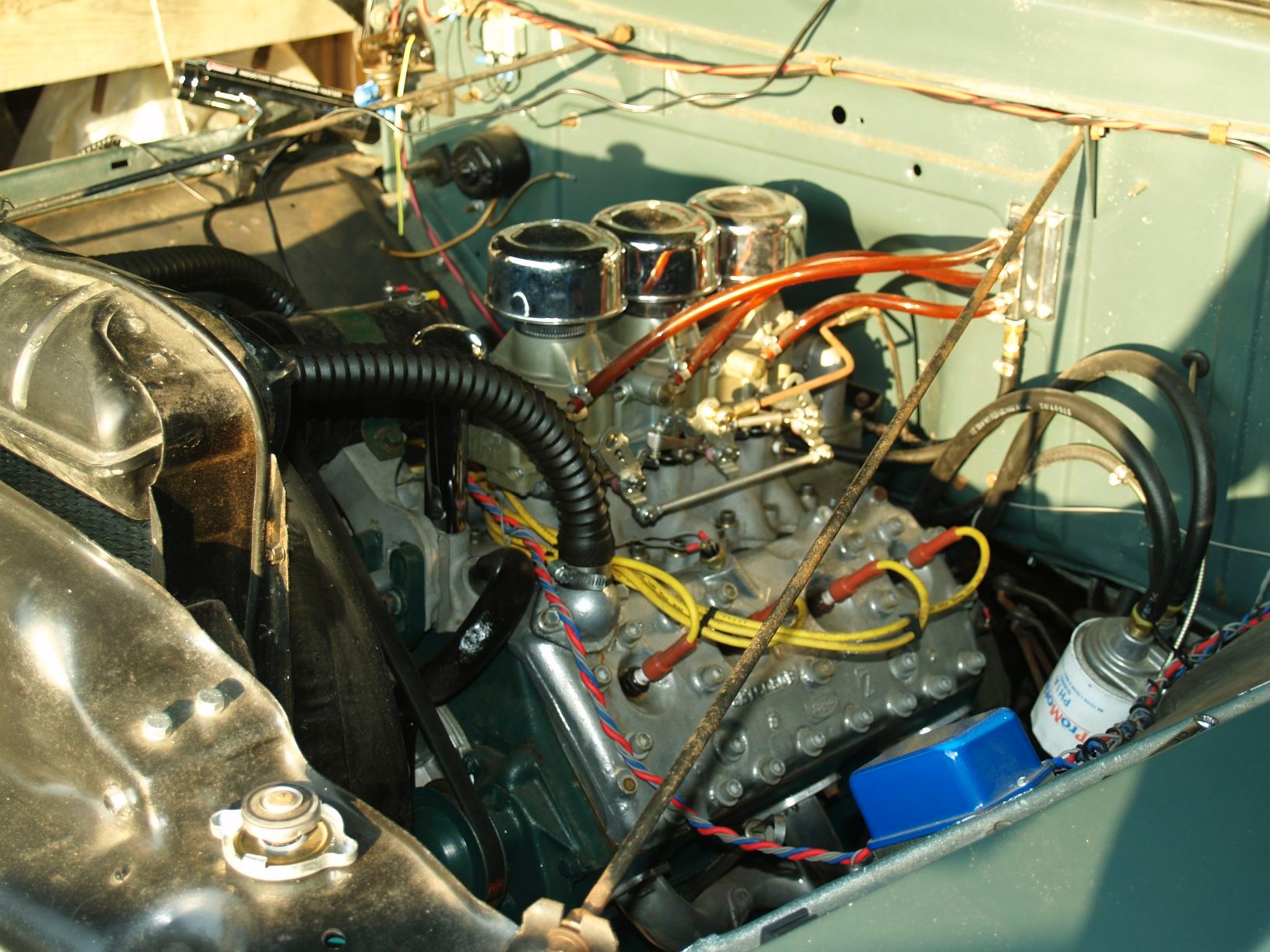