Well, now that the engine is back where it belongs, AND IT STARTS, (see engine page)  I can start putting stuff back together.  Who knew that it would be SO MANY YEARS…  parts are everywhere.  (The joys of working in a BARN!) 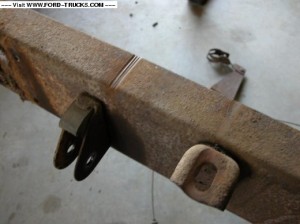 Both sides of the frame were worn from the cab resting on it.
Isaiah, Joshua, and Jonathan helped me lift the cab back into place and once it was bolted down.. I was surprised at how much room there is between the cab and the frame now….

I am amazed at how far the cab is sitting above the frame rails, and yet both rails were deeply grooved, as you can see in the first picture.  The passenger side front cab mount was also cracked and I had corrected it and welded the crack.  I am hoping that all these repairs are going to add up to a good fit and finish…   Here is one of the old cab mounts, no wonder it was rubbing on the frame rails.  Can you say “rode hard and put up wet”? 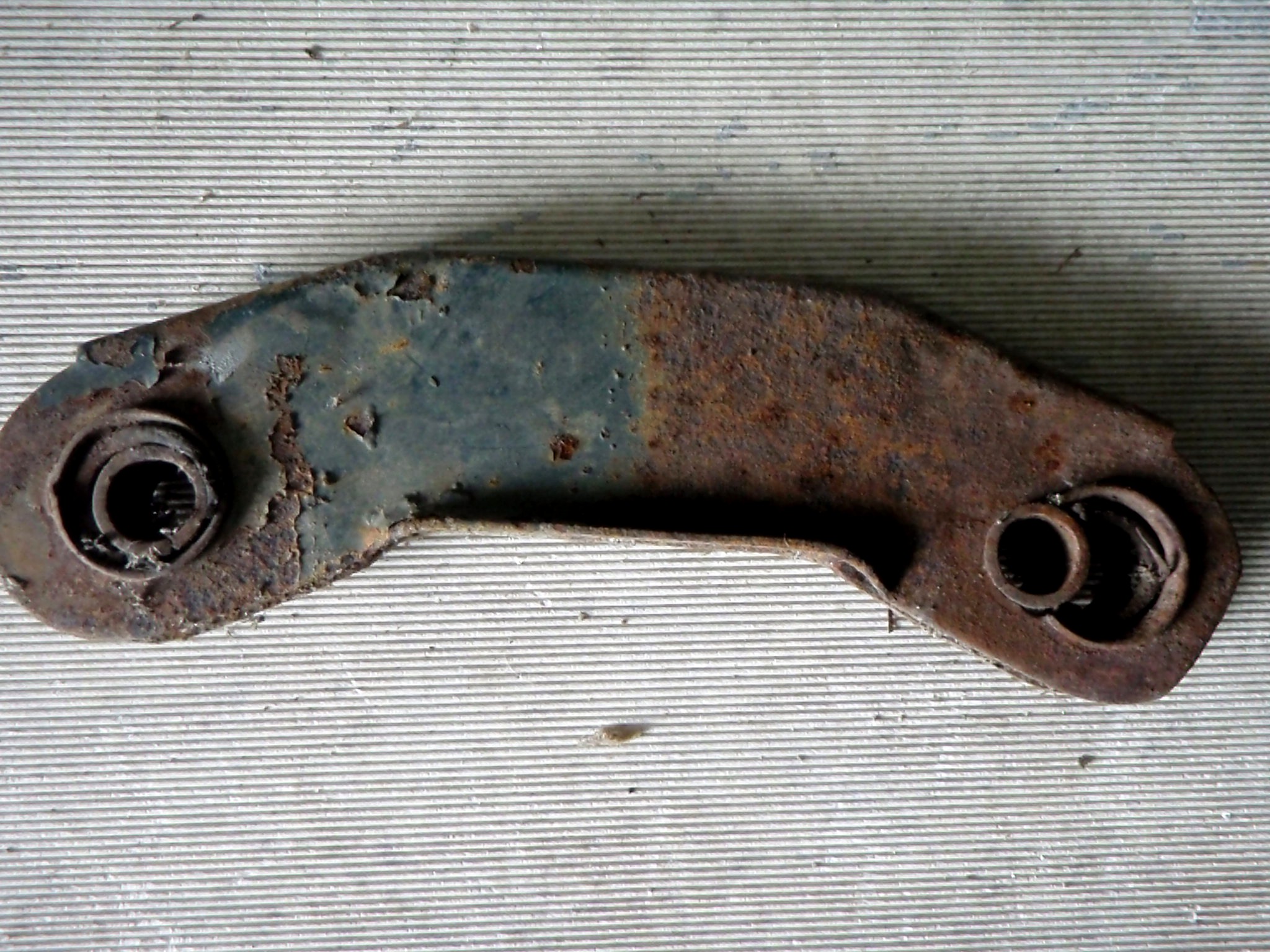 This is similar to the rear shackle mounts.  They too were worn to oval shapes.  Poor Mater was definitely WORK truck.  He only had 78,000 miles on the odometer if my memory serves me.

We drove Mater under his own power today.  July 2nd, 2011.  I’m figuring this is the first time in about 33 years that he was under power.  (Registration sticker in window from 1978.)  He doesn’t have a gas pedal yet, since the new triple deuce carb set up won’t work with the original linkage, but I ran a wire through the firewall and used it as a throttle.  Made it a little hard to drive, having to use one hand for the gas…  BUT we drove up the drive to the house.  Since the bed isn’t on, there is absolutely no weight on the rear tires, so he didn’t have much traction.  J&J sat on the rear frame rails to give him some added weight on the tires. 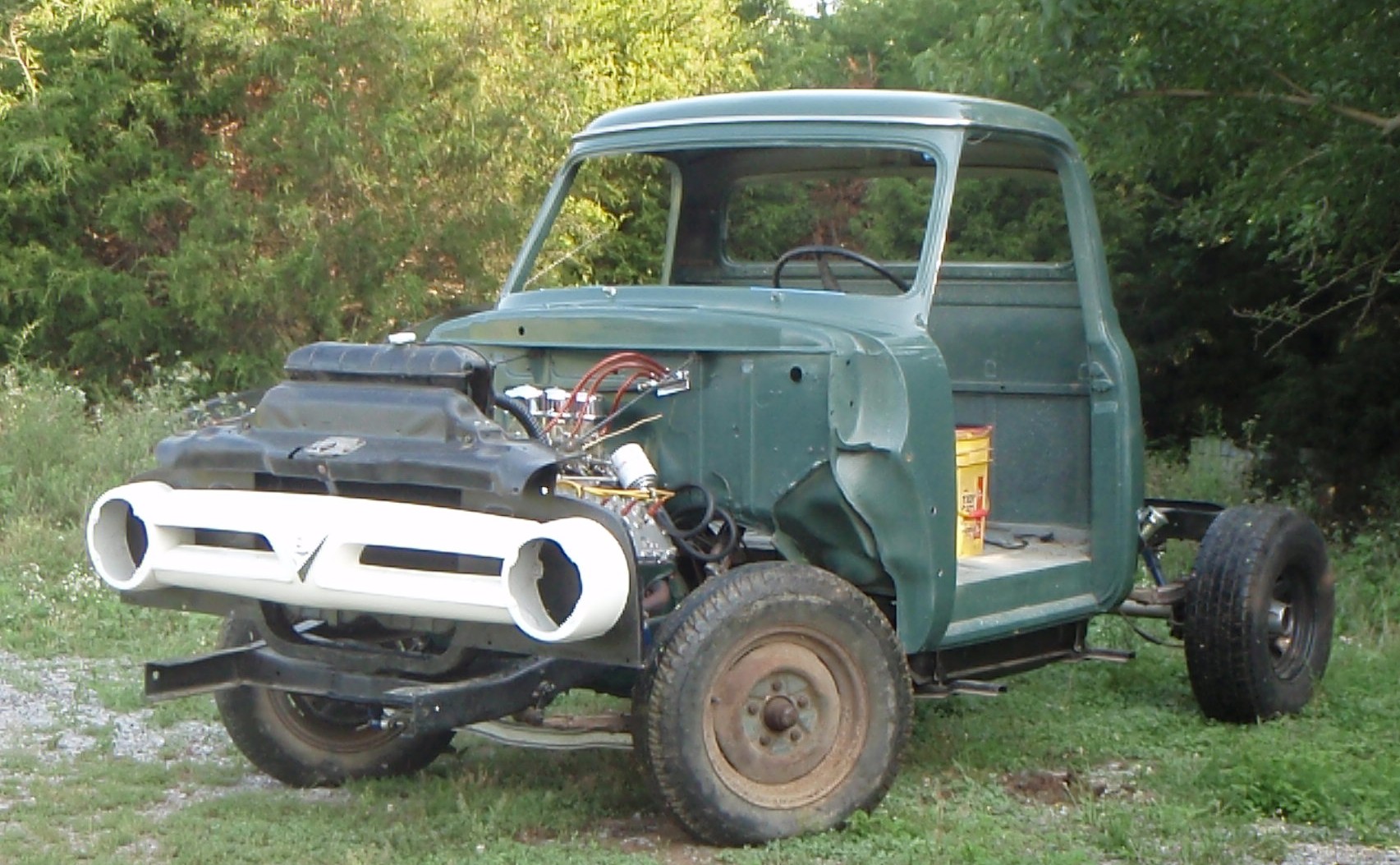 We now know where the name “Bucket Seat” came from.  Should I upholster it, or use the original bench seat???  Decisions, Decisions…. 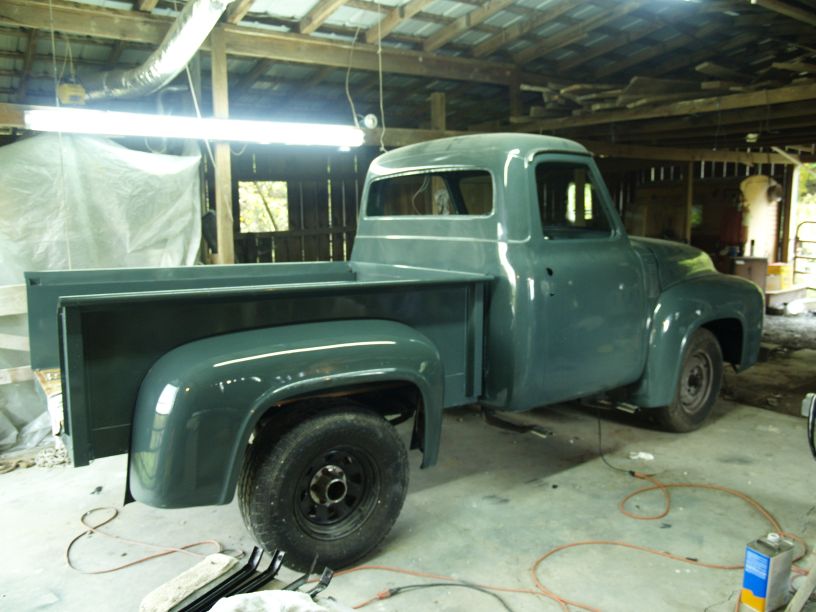 Bed, Fenders, Hood and Windshield in… 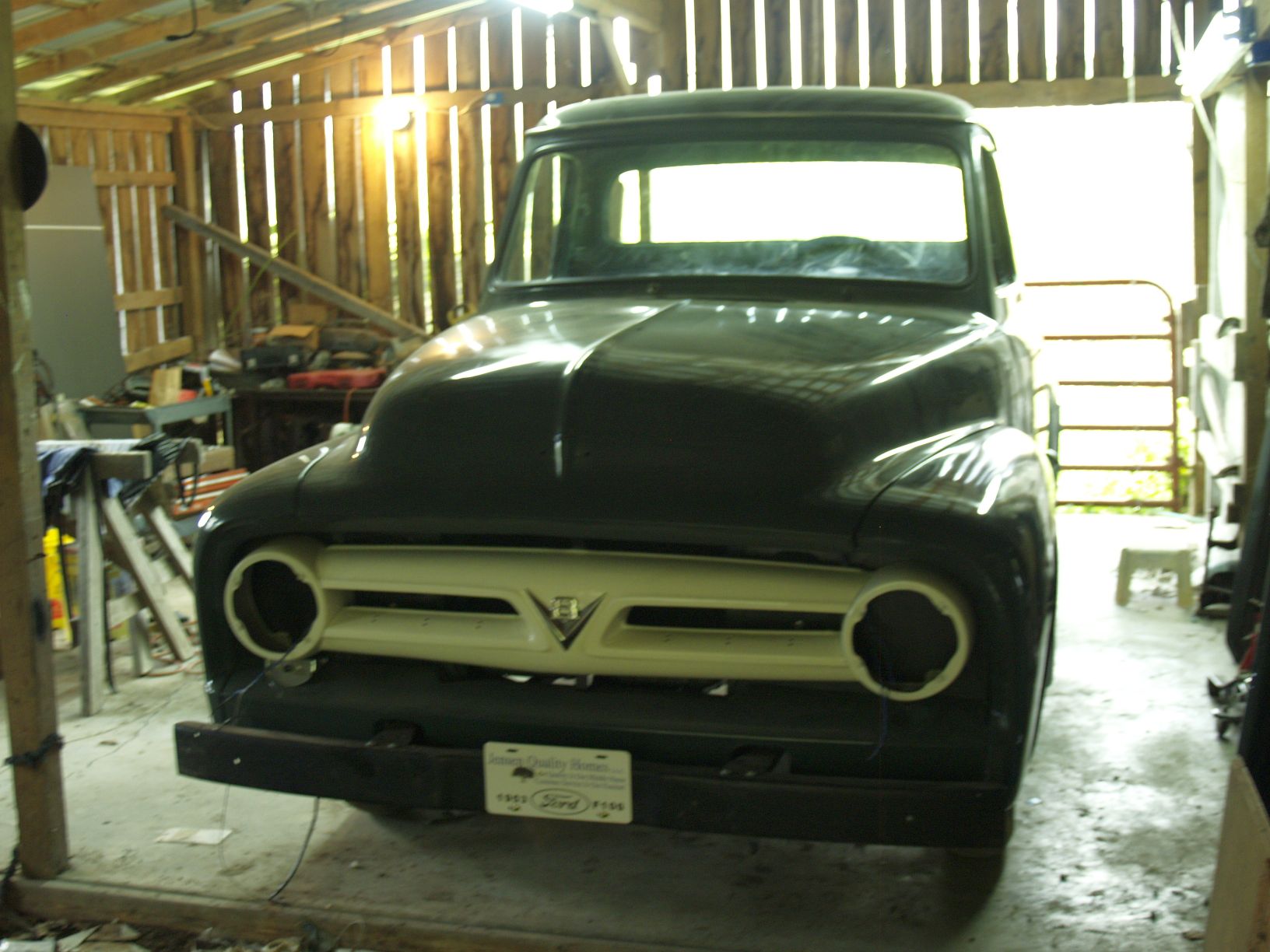 There was a very loud ‘clanking’ noise coming from somewhere, so we turned around and drove back home.  We now believe the noise was coming from the transmission…. 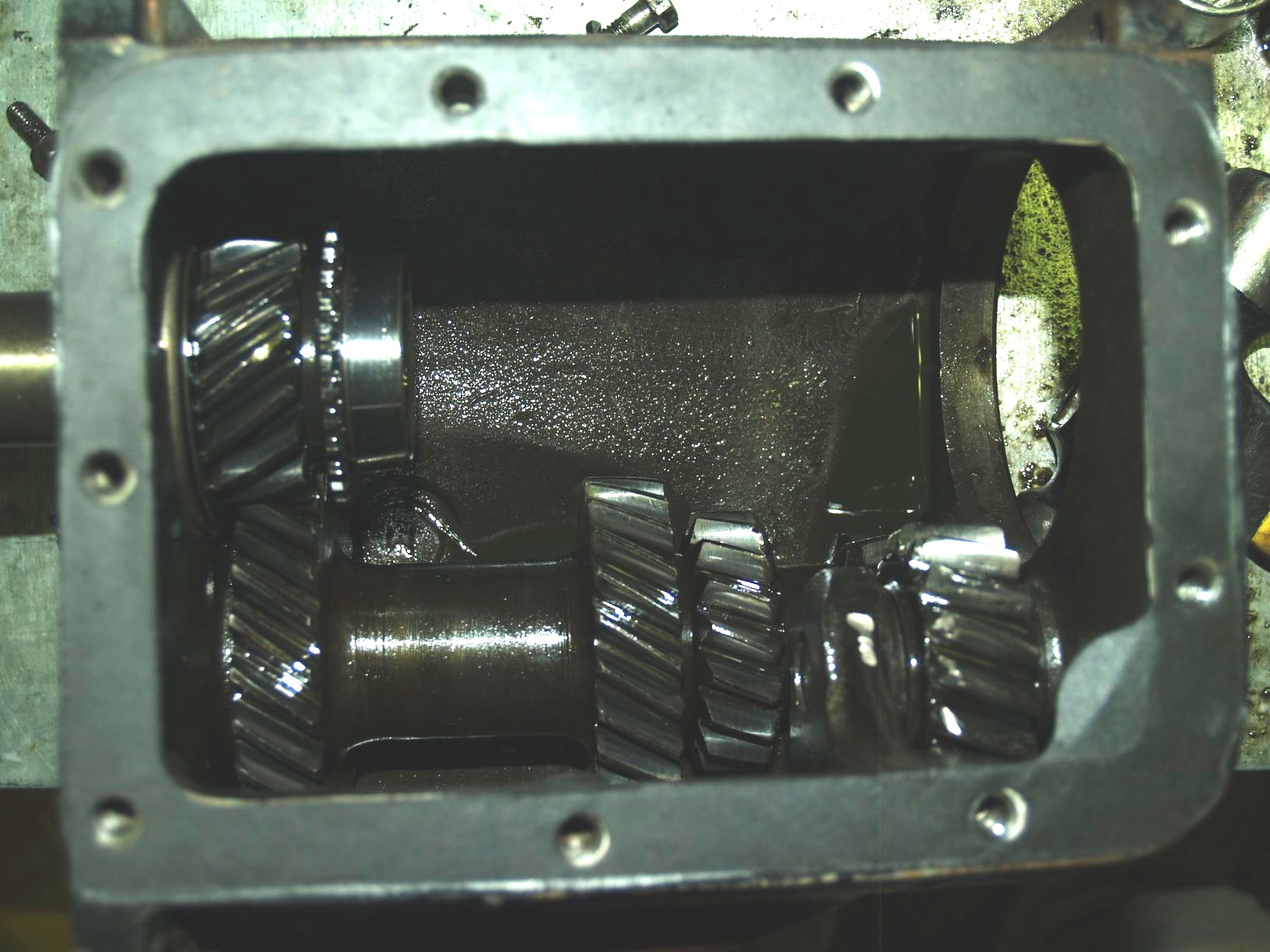 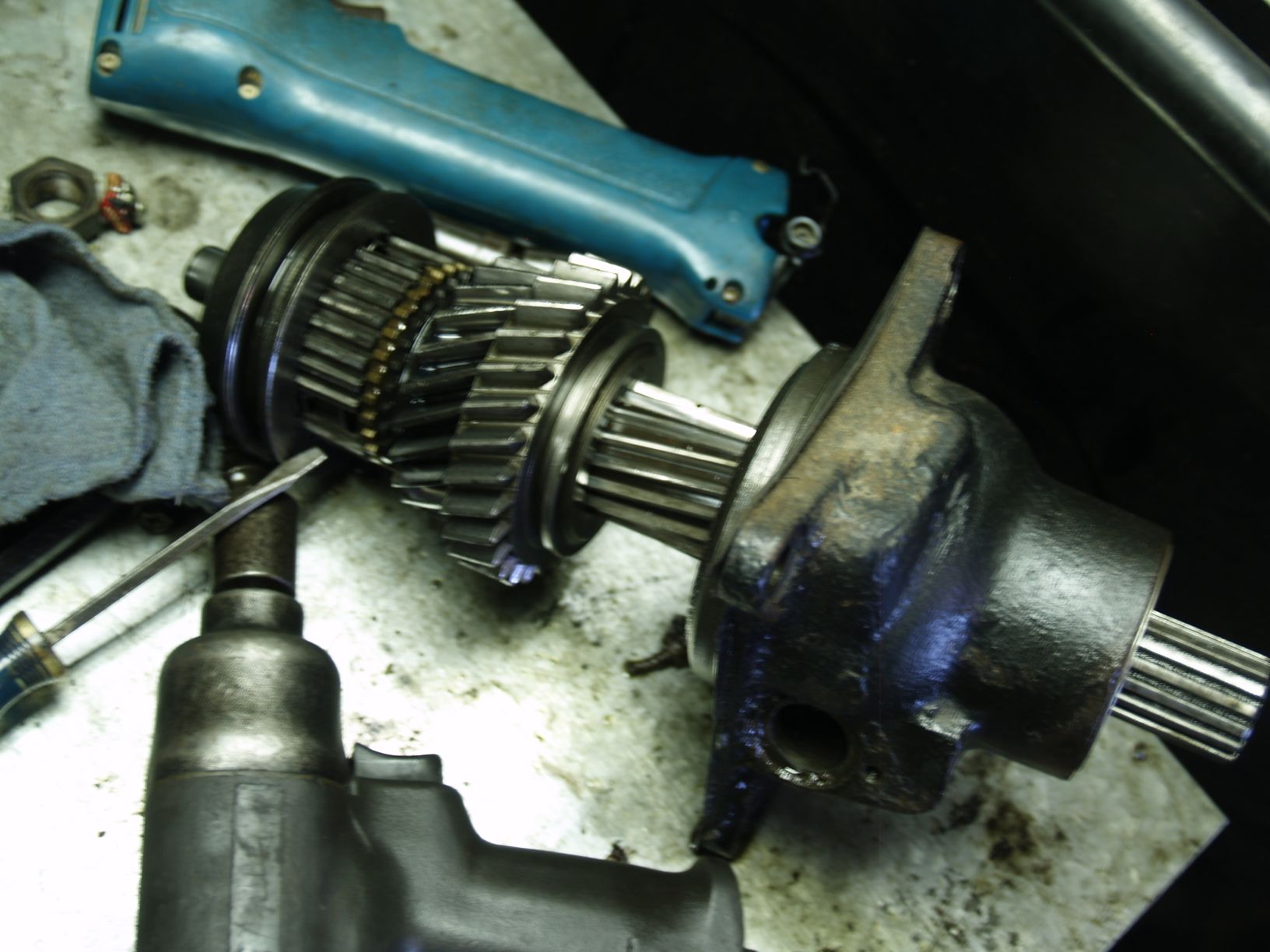 So far, we think the “indexing” mechanism was sticking and not holding one of the gear clusters in the exact right place…  We are soaking the piece (we can’t get the drift pin out to take it apart.) And it is getting better.  But the gears still weren’t lining up right. 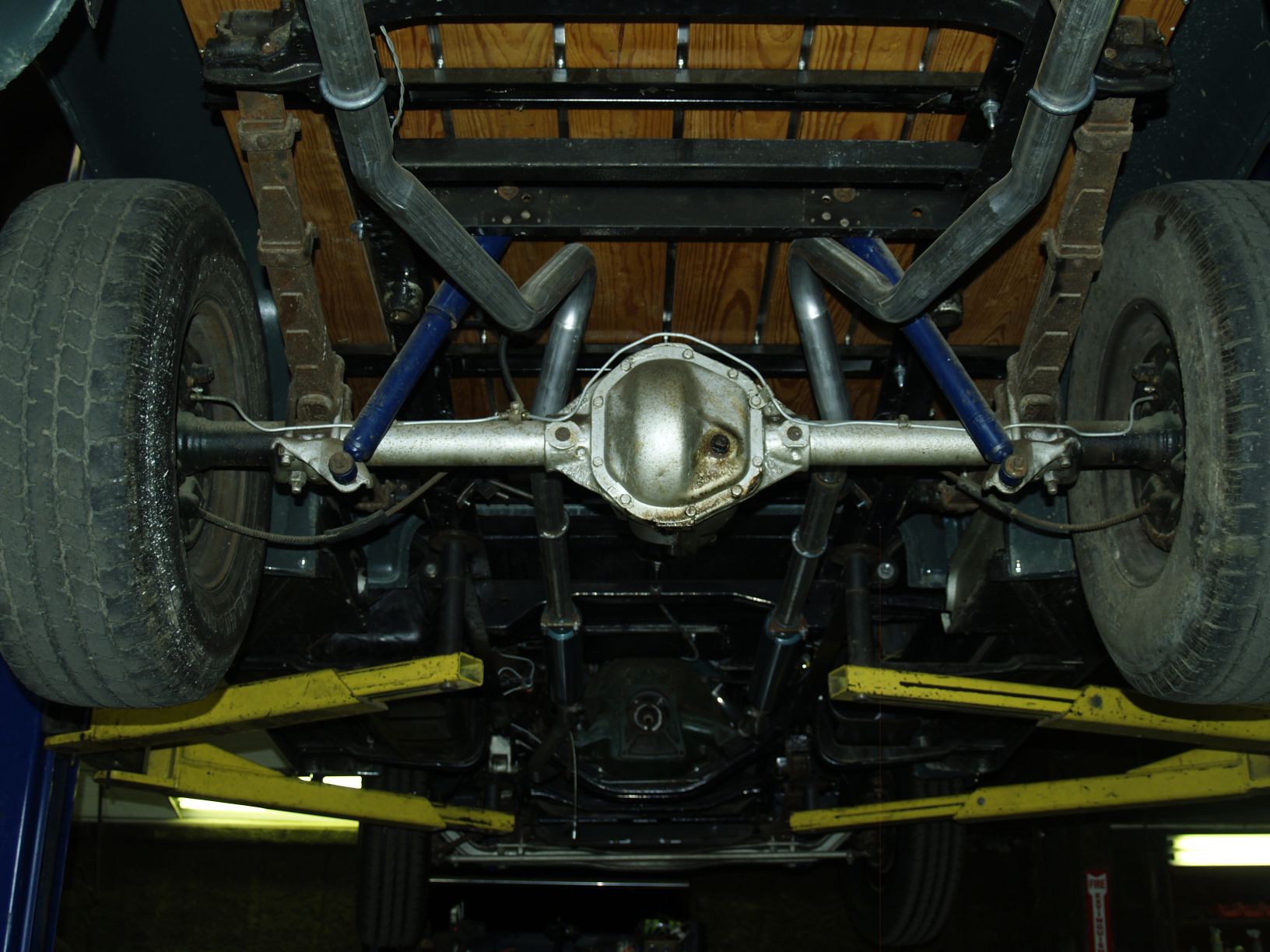 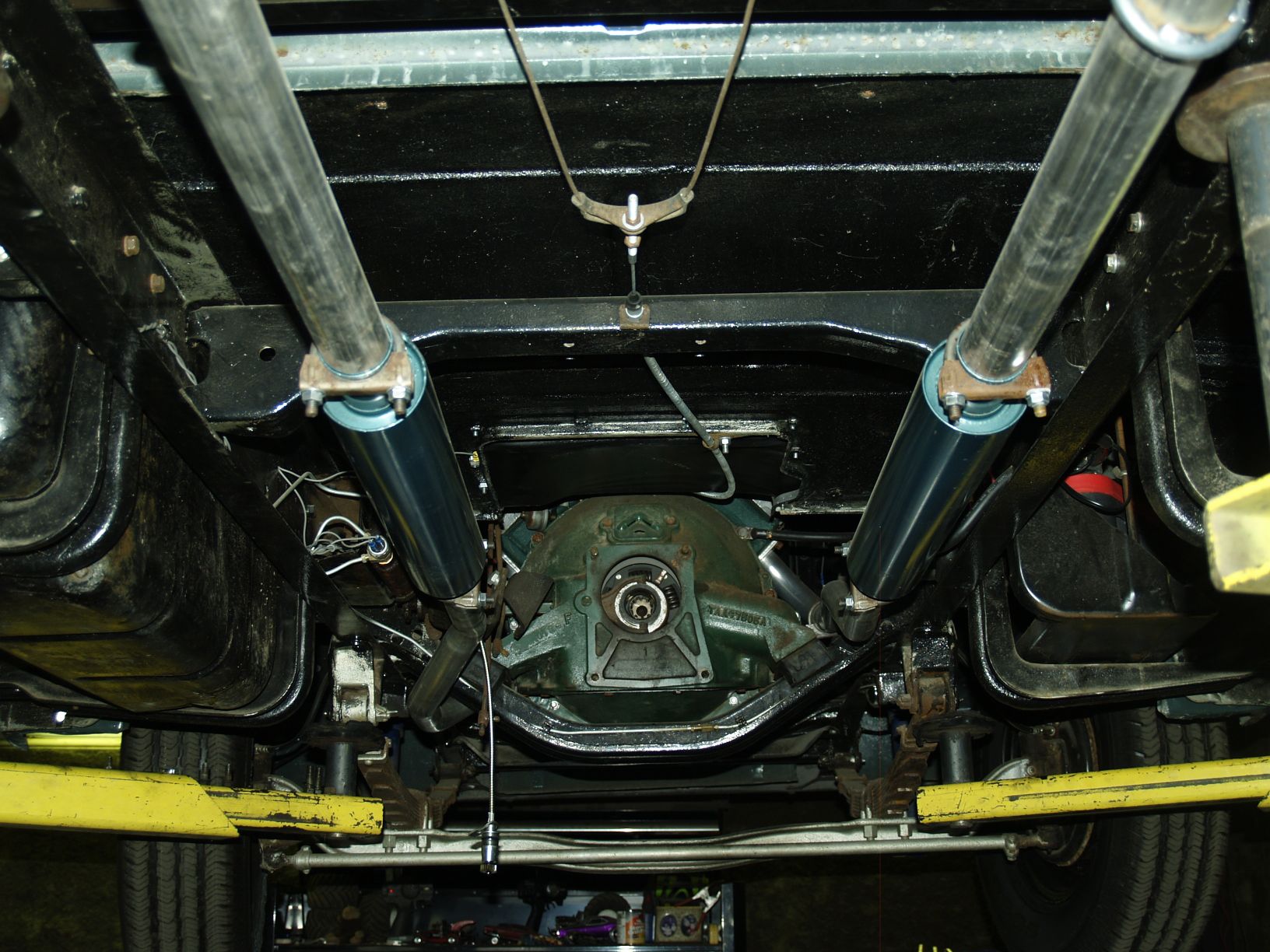 Getting to driving stage…. 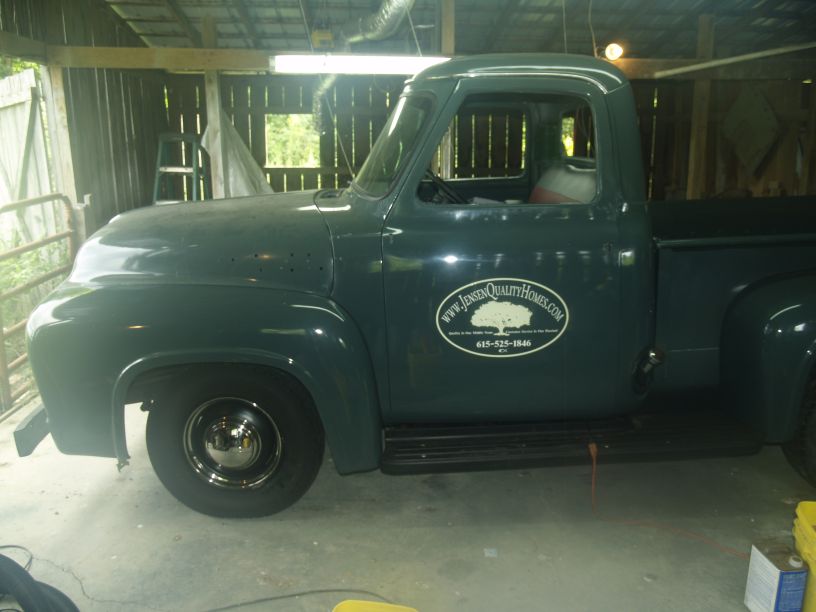 Because of the triple deuce carb setup, I’m thinking that vacuum is going to be an issue.  The original stock distributor is causing the engine to stumble badly.  SO we got a new Mallory, mechanical advance distributor installed.  Mater STARTS and runs like a champ.  Starts up within 1/2 turn.

I took a chance and DROVE Mater to the Graphic Design guy to put my Logo on the doors.  I drove to the gas station and got Mater his first tank of gas in probably 30 years

I drove a total of about 18 miles, what a hoot.

However, when I got there and turn the engine off, it wouldn’t re-start.  It turned over, but wouldn’t fire.  I didn’t have time (or tools) to troubleshoot it, so I left him there to be lettered.  TWO DAYS later I returned with the trailer, and he started RIGHT UP…  I put him on the trailer and brought him home.  He has been starting like a charm in the barn, but the weather hasn’t been nice enough to drive him.  I’m “thinking” maybe the coil might be bad?

OK, I ordered new temp sending units because my temperature gauge wasn’t working.  Drove it down the road to test it and the new ones work.  HOWEVER, when I got back home, it wouldn’t start again….  This time I was able to do some troubleshooting and it DID have spark. (So much for the coil theory.)  BUT while checking the spark, it started.  So back to thinking gas.

Remember the FIRST DRIVE experience?  Well, got the TRANNY worked on, and now we think the noise is coming from the rear end.  SO A GOOD EXCUSE to get a 9″ rear and tone down those 4:11 gears. 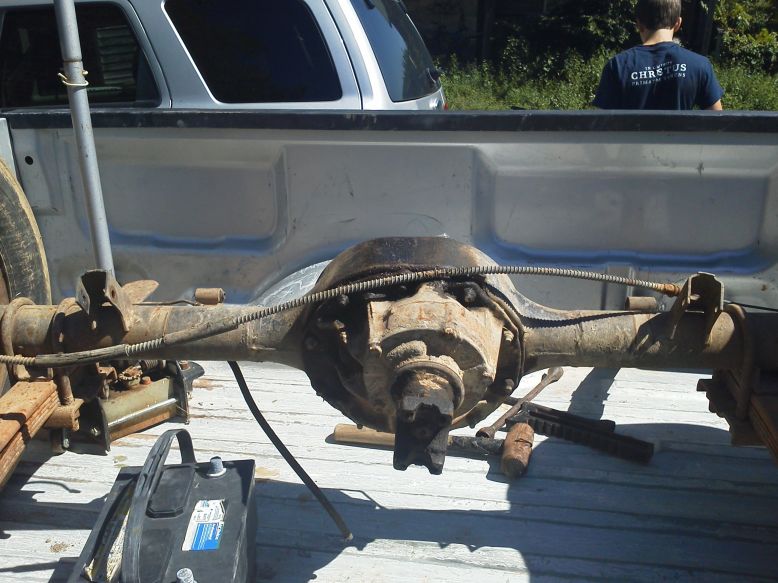 Got the Rear Window installed today… it didn’t go as easy as I thought it would, but it’s in…. 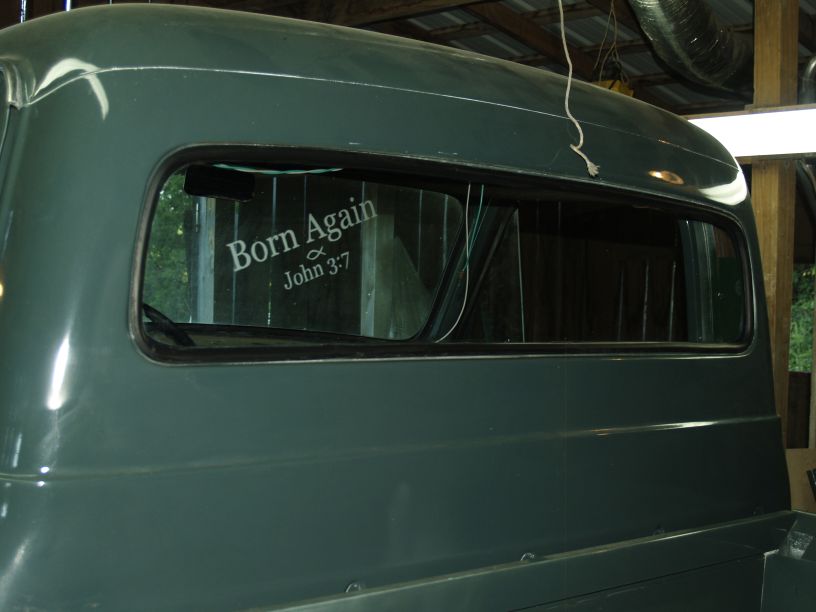 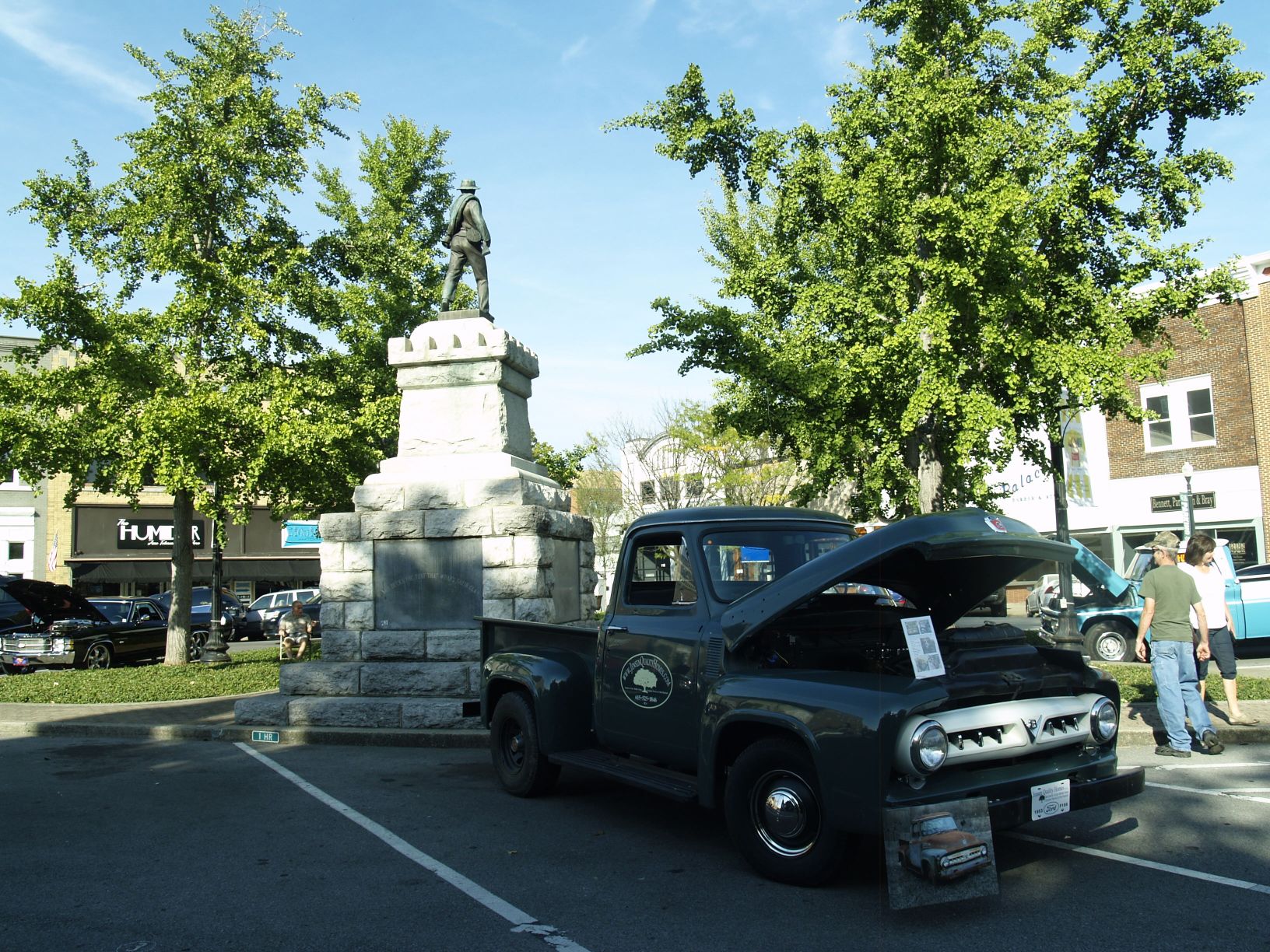 Sept 29th 2012, Mater’s First Car Show…
The Rutherford County Home Builders Association had a car show on the “Square” in downtown Murfreesboro. Mater took “Best in Class”. Still a lot of work to be done, but it was fun.