We bought “Mater” in January of 2004. I had always wanted a project to work on with my five boys and I came across this truck sitting in the front yard of a house. I called my wife and we discussed buying it, so I left a deposit with the owner and left to get a trailer. By the time I returned he had written the word SOLD on the windshield because so many people were stopping. My wife ended up buying the truck for me, for $400. We brought it home and parked it in my neighbors barn. Although we didn’t know much about it at the time, 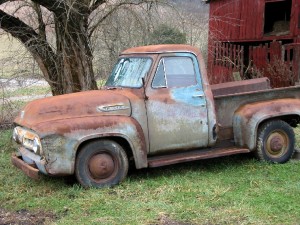 further investigation revealed that it is a 1953 Ford F100. It has a Flathead V8 with a manual 3 speed transmission with the shift on the column. 1953 was the LAST year Ford made the Flathead, and was also Ford’s 50th Anniversary… 1903-1953, and the horn rim says “50th Anniversary Edition”. Mater has the “DELUXE” cab which primarily means it had cardboard door panels, a boomerang trim piece on the side of the hood, and a post mounted rear view mirror.

When we bought it, the owner didn’t have a TITLE, which I didn’t think anything about, seeing as the truck was so old and had obviously been sitting for quite some time. He did give me a bill of sale however.

We didn’t start working on the truck for numerous reasons, one of which was the fact that we built our own home, but my wife passed away in March of 2005 and in September of 2006 we towed Mater from my neighbor’s barn, to our horse barn and started the project. In the spring of 2007 we poured a 20×20 concrete pad inside the horse barn so we no longer had to lie in the dried horse……. anyway, I was happier than a pig in slop.

When the Disney Movie “CARS” came out we all decided that we would name our Truck “MATER” like Tomater without the TOW. And our parts truck became known as “FRED” also from the movie. This way we would know which truck we were talking about when we needed parts. 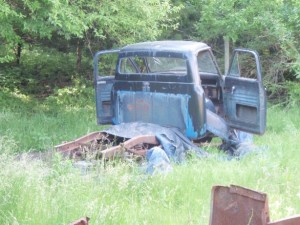 This would be FRED

Mater was pretty much complete, but would require a lot more work than I had initially realized. This was our first (and probably last) restoration project. Although he turned out to be in better shape than a lot of other trucks I have learned about since (FTE Ford Truck Enthusiasts web site) on the internet, he still had some rust through issues and the dents in the front fenders were much harder to straighten out that I anticipated. The bed sides and front are steel and the floor was wood. The bed floor was completely and totally rotten, and the sides were DEEPLY pitted with rust. 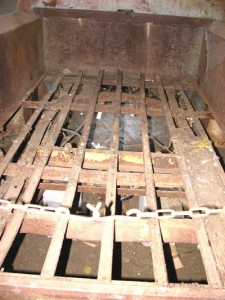 One of the heads to the engine was also laying in the bed of the truck, and when we pulled the engine, we discovered that all the bolts for the oil pan had been removed. There was a wheel tax sticker from Cannon County (where we live) from 1978 on the front windshield, so I’m thinking that something went wrong with the engine, they started to work on it, but gave up, probably figuring the truck was 25 years old and not worth fixing. (More on the engine in the engine page.)

BILL OF SALE Vs TITLE

Shortly after tearing Mater down to the frame, I stopped into the state motor vehicle office to see what I had to do to get a title. After MUCH ado, the supervisor said that I should never buy a vehicle without a title, cause it’s next to impossible to get one….. They said I would have to write to the state and ask them to research who the last titled owner was, then track them down and ask them to apply for a duplicate title. The said that they don’t keep track of ‘stolen’ vehicles after seven years!!! I was a bit discouraged, having put a fair amount of work into Mater by this time. About this time I also came across a guy on FTE who was going to JUNK his 53 and wanted to know if anyone wanted to buy his title. After some posts about that being highly illegal, I offered to buy the truck as a parts truck, and I would get the title with it, which is how we got FRED. Fred lived about 3.5 hours away so Christopher and I borrowed a trailer and went and picked up Fred. When I got him home, it was pretty obvious why the PO (previous owner) was going to scrap him… however, I have been able to salvage enough parts already for Mater to offset the cost of Fred. (Not to mention the title.)

One of my daughters, Marybeth, totaled her car and when I went to get the title for a new car she bought, I went to our COUNTY motor vehicle office, which consists of an “older” gentleman and his family. Long story short, I asked them if there was anything I could do to get a title for this 55 year old truck and they said sure, just bring in the Bill of Sale and the VIN… which I did, and had a Tag and Title within 3 days. YIPPEE

The Vin on the tag in the glove compartment matches the VIN stamped on the frame. Although the stamp was hard to find (it wasn’t in the usual spot) and now that the frame is painted, you can’t read it. 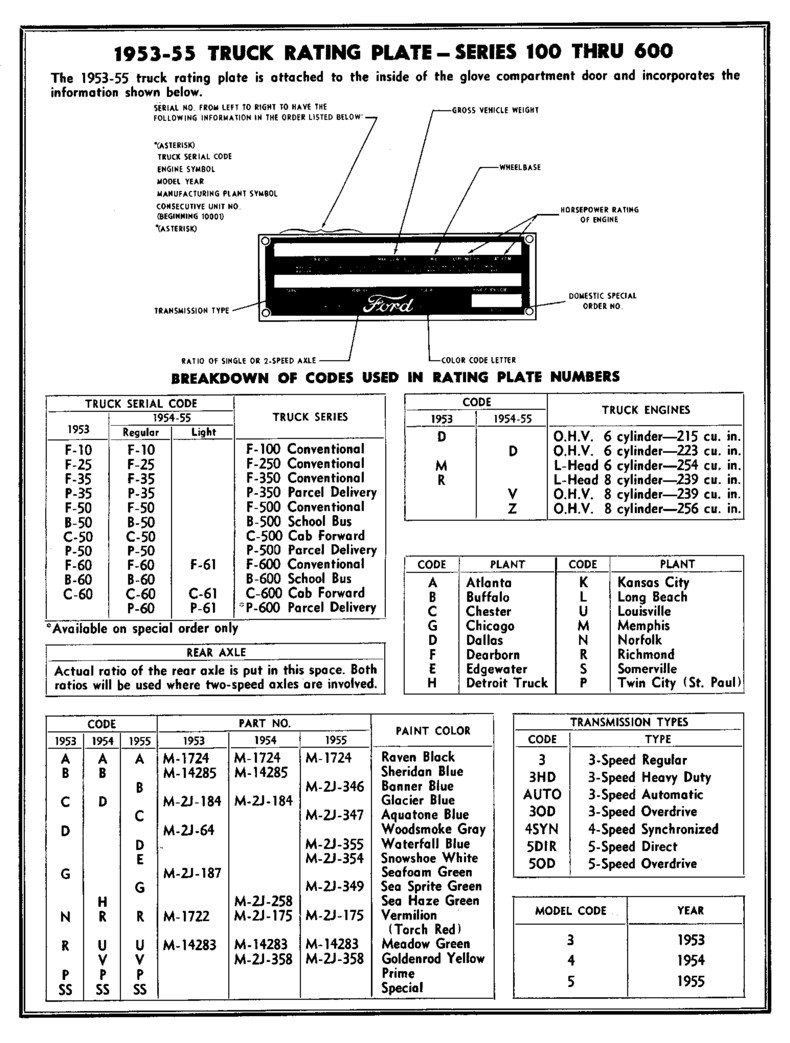